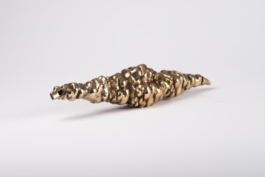 This object is a ceremonial object for an imaginary tribe, which doesn’t exist in reality but as construction. It exists in my intercultural identity from more than two cultural crossings. It elucidates the ‘third space’ located among my residential cultural experiences, heterogeneous mixtures and mutual relationships. The third space explains “the uniqueness of each person or context as a hybrid because every person is a hybrid of their unique set of affinities in identity factors.”¹ In this project, the third space is located in the research of Pre-Hispanic history and Colombian highly developed metal casting techniques for ritual ceremonies and their agriculture.

In the Pre-Hispanic era of Colombia, the natives had a diet based mainly on tubers like mashua, oca, and ulluco. Vegetables such as corn or cucurbits e.g. the ahuyama. Their meat products were limited to small animals such as deer, mice, rabbits, boars, foxes, peccaries and weasels. Thus the tubers were fundamental in the diet of this agricultural society since they were the most traditional crop. ² Gonzalo Jiménez de Quesada, a conqueror of the New Kingdom of Granada, referred, in a document written in the mid-sixteenth century, to the tubers in the following quote: "they (the Muisca) had tubers that they call ‘cubios’, which they put in their stews and it is a great maintenance, its fruit is very lustrous yellow, five to six fingers long, thin to a large extent, and quite thick at the tip. The taste is something acrid without irritation ".³

However, at the end of the eighteenth-century indigenous cuisine was still but barely preserved, with many difficulties. Because they were in a minority, their crops were often destroyed by cattle, owned by the Spaniards. Their crops were replaced by European plantations and the mestizos displaced them on their lands. ⁴ In my work, I pay attention to the fact that colonization was unutilized and neglected some crops, changed the majority crop consumption, influenced genetic diversity in agriculture and what people eat today in a postcolonial context.

This object is designed for being a part of a presentation of the fictive tribe’s ritual ceremony. It is a “mediatory” object through which a magical or mystical connection is believed to be made between one culture and others. The object is made using bronze casting techniques. I cast a real mashua to beeswax and connected fifteen wax mashua copies in order to secure enough inner space.

When a performer blows the mouthpiece, a sensor activates a motor and synthesizer. The sound isn't designed to be very loud but it has a noticeable volume with minimal tones when the motor touches an inner surface and delivers a frequency by traveling the structure inside. When a performer passes by people the sound combines with the surroundings where the performer plays.