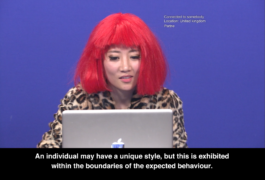 My work, Connected to Somebody, takes a critical view of a social role and a psychological tension what an individual is required for it, which is from the other’s expectation and how the individual reacts from a vulnerable and forced situation when an individual encounter the situation to be connected to ‘somebody’. Come to think of ‘somebody’ as a term, I consider how we should define it in the communication. The dictionary definition of ‘somebody’ is a person who is not known, named, or specified. If we meet others, at first sight, we are all unknown strangers and unidentified as ‘somebody’. In a process, individuals are categorized with ethnicity, race, gender, religion, sexuality and etc. and typecast as a clarified person. The social expectations were based on a part of this process, how individuals should behave toward one another. However, social expectations for behaviors that cannot be easily and objectively quantified as good or bad can be more complex. As my daily reflects I might define the term of ‘somebody’ in my work, those who I bump into randomly on the street as aggressive strangers and those who categorize me at a glance as an Asian woman who can be yelled whatever they feel inclined or at least I would like to agonize about the term and related matters how I should communicate with ‘somebody’ and who is ‘somebody’ for me and who I can be friendly and honest with and who I can’t be.

This question is not only just raised in real life but also in virtual life. I started to think about this project from my personal experience that I named my Skype ID as ‘Sexy Asian girl’ with my birth-year combination. I named this ID followed by one of my friend, the ID Sexy Asian boy. He is an Asian who was born in Germany and grown up. I thought his ID is very witty and sarcastic with his complex because he told me often that he has generally believed he is not attractive because he is a small and non-masculine Asian in western social beauty standard. Interestingly, after I registered the ID, I get requested from so many random people on average over twenty daily for having sex chat. It was interesting that those may expect something already from my Identification literally supposed to be ‘sexy’, an ‘Asian’, and a ‘girl’ without knowing me as a person and this mocking naming lost a context and an original intention to others and it becomes rather a certain plausible virtual character.

I have never talked with those who requested me to chat and I blocked them in a few years and one day when I blocked the requests and thought if they demand me to participate in private chat then I would invite them in my artistic practice and open space. As a performer, I communicate with ‘somebody’ those who have not that much information about me. I explain the project as an artist and where I am and do interview somebody in a way. Thus, my intention as an art project and expectation in a certain way are supposed to be faced to individuals and their expectations. I am in a broadcasting station with professional 3 pump cameras and two hand cameras. I wear red hair wig and leopard fur coat. On the table, there are a laptop and a small cat toy. The wall is covered up with blue, which can be converted as a pop neon typographical animation by keying technique on the live broadcasting program. I expect especially how I get forced to take part in sex role identification and gender stereotypes in social expectation context. I consider the station and performing situation as a manipulated module space originated from the streets, where I meet random aggressive people in the face by encountering virtual contact and physical public location. This set up is a part of my thought how I should face to my vulnerability and deal with forced expectation and how I handle the situation if my personal character, educational achievement or political tendency get ignored or even when they don’t care where I come from and just define me as an Asian woman and I get expected to behave in an altruistic way and my altruistic behavior is not considered as an individual character but as a typical one.