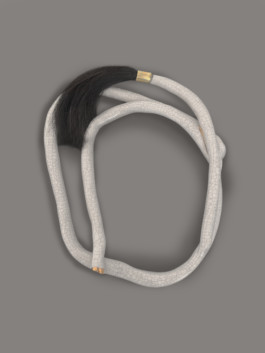 When I visited the Museo Nacional de Colombia for the first time, I found one object called ‘Cinta ganadera’. ¹

In my work, I pay attention to the meaning of this archaeological material being found, unavoidably, here and now; in a present. The object on display in the Museo isn’t trapped in a remote and ideal Colombian past but has rather existed continuously since the conquest, until it comes to stand before me. It could be possible that it has been ignored at times, or discarded thoughtlessly as garbage. According to what the museum investigator wrote, it has been passed ‘from generation to generation’.

The museum offers information about the object: it was a common material, horsehair, and in the end, one of many that were produced by Colombian people in the past. I imagined that five hundred years from now, future archaeologists would only have glass, or plastic, or metal, to piece together our daily existence.

Despite being just one material, the twisted horsehair gives me glimpses into the complex and multi-sensory world experience of the person who made it. The pieces on the display show more ephemeral stimuli that we take for granted, but which form the foundation of human experience: the scents, sounds, flavors and textures of the past.

I transformed ‘Cinta ganadera’ to ceramics and human hair. By observing the material structure of horse hair it becomes a source of inspiration. Ceramics could be simply cooked clay but it also expresses fragility, firmness, and durability. The clay is fundamentally made from the soil which has experienced the history of us living beings.

Also, I combine ceramics with human hair so its material memories reveal our own changing relationship with the past. Thanks to those properties I conceptually choose those materials as an interpretation-medium. When it becomes transformed for artistic purposes, it is not a useful object anymore, rather it is a reminder of the past with references.

¹ By the time in the national museum of Colombia, there weren’t any information about how it is called, who made it, what is the purpose of it and what it is made of. I sent an e-mail to the museum with some curiosity. After three weeks, the museum investigator for the curation of ethnography offered the following detail information. It is made by Hermes Romero Vidal in Paz de Aripro. ‘Cinta ganadera’ is ribbon livestock for many usages such as marking cattle, binding horn to drink, calling cows and maracas to accompany the festivities. It is a tool that has been used for decades and has passed from generation to generation among groups that have inhabited the Plains Oriental. In this particular case, it is a kind of Ribbon livestock to bind the livestock.