Internal other focuses on the endangered fauna in the “Transboundary Protected Area” of the DMZ (the Korean Demilitarized Zone between South Korea and North Korea). For 66 years and along 155 miles, this zone has been an “accidental wildlife paradise”[1] for wild animals.[2] Among them the endangered red-crowned crane, which plays an important role in the Korean culture and tradition: it is a symbol of longevity, fidelity, morality, and auspicious sign, a spiritual vehicle for the mountain gods, a medium drifting between heaven and earth.

In Internal other I have composed a setup with animals as tribal residential populations; the red-crowned crane takes on the role of the shamanic narrator. On her “magical flight” through metaphorical and virtual landscapes, she takes us to several places in the DMZ, ranging from real to imaginary ones, i.e. to the “inner mountain snowfields” in our mind.[3]

The sound design is partly produced with low-frequency sound. It is required to listen with good quality headphones or audio systems.

*The found footage uses shamanism in Korea, which was created in 1982 in the National Film Studio and opened as a KOGL type 1. The work can be downloaded for free from National Archives of Korea, archives.go.kr. 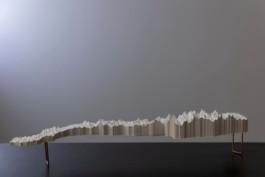 Between North Korea and South Korea, there is DMZ(Demilitarized Zone). The sculpture shows the DMZ borderline which transforms from the digital data of google earth to 3D data on how it looks.

The project is supported by Transmedialer Raum Köln, the academy of media art in Cologne, We , Animals, Choi&Lager Gallery.