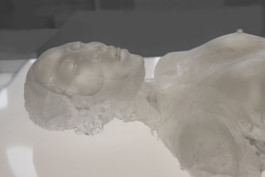 “If we think identity refers to the way people understand themselves in relation to other persons, to the world around them and often also to supernatural realms. Identity is a consequence of self-consciousness within particular social networks embedded within a particular language. [...]The awareness of a strange aspect of the human situation can be encountered in a wide variety of ways, from asserting belief in an immortal soul to emphasizing the continuity of identity. Identity and destiny become intimately combined and includes the way emotions pervade ideas to generate values and beliefs.”¹

In my work, I relate death rites to emotional status and ideas of identity which is based on an understanding of expressions of identity in ancient Egyptian mortuary rites² and self-mummification in Buddhism³ context.

I present a torso made of sugar for an imaginary tribe, which doesn’t exist in reality but as construction and their ritual ceremony. It exists in my intercultural identity from more than two cultural crossings. It elucidates the ‘third space’ located among my residential cultural experiences, heterogeneous mixtures and mutual relationships. The third space explains “the uniqueness of each person or context as a hybrid because every person is a hybrid of their unique set of affinities in identity factors.”⁴ The sugar torso is a remain of the tribe and their rites and I present my work as a format of an archaeological founds.

Sugar is a raw material that lasts in a long period and I use sugar as a material referring to immortality and fragile emotional status related to a German saying. In German, there is a useful expression ‘ nicht aus Zucker sein ’.⁵ It means that you are not weak or sensitive. I found a psychological self-defense mechanism from it.

I cast my body with silicon, warmed up sugar with a double boiler and poured it in the mold many times. The surface of this sculpture is made of sugar with a fragile structure. Each time boiled sugar is poured in the negative form of the body, the temperature difference causes cracks and refills them with new layers.

² “The natural preservation of the dead had a profound effect on ancient Egyptian religion. Deliberate mummification became an integral part of the rituals for the dead beginning as early as the 2nd dynasty (about 2800 BC). Egyptians saw the preservation of the body after death as an important step to living well in the afterlife.” (Dunn, Jimmy, An Overview of Mummification in Ancient Egypt, [Online], http://www.touregypt.net/featurestories/mummification.htm, [Accessed: 22. August. 2011].)

³ “One of the best-known self-mummification rituals is the one that was practiced by Shingon Buddhists of Japan. This ritual took years to complete and involved starvation and dehydration. During the first three years, an ascetic monk significantly decreased his body fat by eating only nuts, seeds, and berries, while he increased his physical activity. Japanese Sokushinbutsu monks were known to drink a tea made from the urushi tree, also known as the Chinese lacquer tree because it’s sap is used to lacquer tableware, instruments, and jewelry.” (Strangremains, The extreme ritual of self-mummification practiced by Buddhist monks, [Online], https://strangeremains.com/2015/01/30/read-about-self-mummification-an-extreme-way-of-saving-money-on-embalming/, [Accessed: 30 January 2015].)

⁵ e.g. A mother says to her child "you do not go out of the house in the rain. ", the child replies "yes, but I'm not sugar. " Since sugar dissolves in moisture, it is said that one is not sugar if one is not afraid of water and e.g. even without umbrella goes through the rain.